Well, here it is the down-stretch toward the end of the year 2018! Like most folks my to-do list never reaches the finale, there are always additions and last-minute things that make it to the list. Yet with that said I’m happy to announce the completion of at least two things on my list this year.

JUST SOME STUFF is my newest album of recorded original music. We started the project in 2016, but recurrent CTS kept my hands and fingers numb. 4 hand surgeries in 2017 really put a damper on the list, and the project, but that’s another blog horror story. With some semblance of finger ability (trigger finger syndrome popped up soon after CTS recovery, bummer!) we completed the project. There are 15 original tunes spanning folk, Americana, to funky-folk blues. The album features two new songs iconic to Mineral Wells, Texas, famous for the crazy water mineral wells that flourished during the early part of the 20th Century when the Baker Hotel was erected. Now defunct, the eyesore is a featured landmark. Crazy Water and Baker Hotel Blues pay tribute to the time. 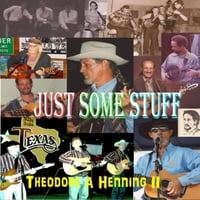 My second achievement is that I finished a novel started over 5 years ago! It is titled, THE SAUWASTIKA ENIGMA offered as an eBook at Amazon.com or print version. The story line involves two young insurance investigators who get caught up in two mysteries; one revolves around a coin believed to be a map of sorts leading to hidden WWII treasure. The concomitant mystery of a loose-leaf piece of paper once found in an old treasure hunters’s journal that presents peculiar notations that could be clues to treasure, or not.

The Sauwastika Enigma by Theodore A Henning II Link: http://a.co/d/ingVvqF
Ok folks, that’s it for this post, check out the music and prose, then give me a heads up.